Scottish Air News was established as the  Turnhouse Junior Spotters News Sheet in the summer of 1965 by Andrew S. Murray, with the assistance of William Bishop and Duncan McLean and the first edition was published in late October. The first edition was free to all spotters around Edinburgh Airport, whilst subsequent editions were provided to subscribers only, at 7/6d per year.

The primary aim of the Club was to allow bona fide spotters under 16 years of age, the use of the terminal building. Edinburgh Airport Limited were agreeable to the establishment of the Club, and made some effort to assist. By the end of October the Club had 32 members.

Leuchars, Perth (Scone), Inverness and Wick visitors were quickly added, and by February 1966 the Club had merged with the Dyce Aviation Enthusiasts newsletter, run at the time by Gordon Dorward, and reports were added from Dundee and Kinloss.

The name had obviously outgrown Turnhouse, so in March 1966 the group was re-named Scottish Air News for the fifth magazine, appropriate because Renfrew Airport was added from this date, together with the first (brief) report from Prestwick. The parent group became known as the Central Scotland Aviation Group (CSAG), and retains the trading name to this day, although the Scottish Air News (SCAN) brand is better known.

​By the summer of 1966 the magazine had grown to ten pages, and regular Prestwick reports were available from then on.​​ 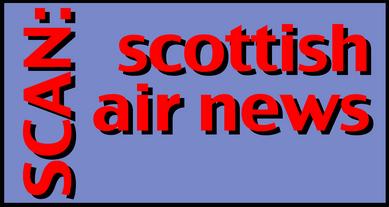 The magazine went from strength to strength in the 1970s as the popularity of plane spotting reached a peak, and SCAN had more than 700 members at one point.

Although photographs had been used as early as December 1966, quality was severely lacking, and in early 1977 the magazine was revamped in a new A5 format, complete with a photo cover page.

​Computers were fully employed by 1998, and by then photos became a regular feature. Colour was first tested in the Scottish Register cover of 2002, and a regular colour cover/inside cover was used from April 2003.

The magazine went all colour, initially as a test from July 2005, and the Group took the decision to invest in its own high quality printer in 2007. During 2006 the Group produced its first Archive DVDs, meaning that every edition of the magazine back to 1965 would be available at a reasonable price, assisting historians and enthusiasts alike in documenting Scotland's aviation history.

SCAN continues to flourish beyond its 50th anniversary, celebrated in November 2015, as a core of enthusiasts continue to produce the country's best non-professional aviation magazine.​